What We Must Make Uhuru Kenyatta Do 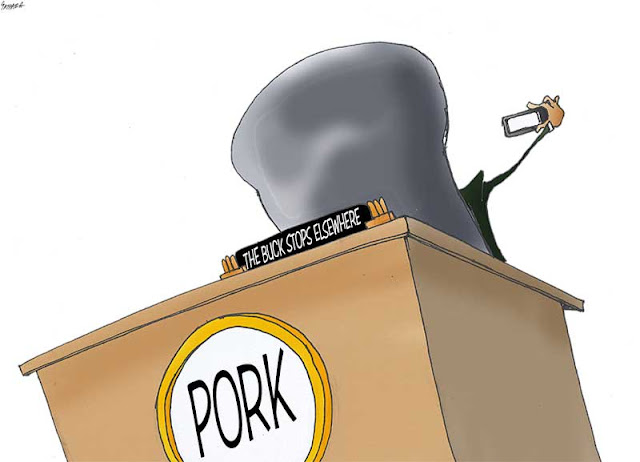 With that statement, two weeks ago President Uhuru Kenyatta seemed to throw his hands up in resignation. The most powerful man in the land claiming to be powerless in the face of the rampant stealing of public resources that has now become the hallmark of his administration.

It surely does seem that everything the Jubilee administration touches turns to loot. Few of the projects it has initiated over the last 43 months -from laptops for schoolkids to the Standard Gauge Railway to the free maternity programme- have escaped the reek of corruption. Anti-corruption crusader, John Githongo, says it is “by far the most corrupt government in our history”.

And he should know. As head of the Office of Governance and Ethics. he famously blew the lid off the Angloleasing scandal, which annihilated the Mwai Kibaki regime’s anti-graft credentials and earned him death threats and exile. Few will have forgotten how in 2004 the then British High Commissioner, Edward Clay, described the gluttonous Kibaki acolytes as “vomit[ing] all over our shoes”.

It is all so very different from the euphoria that accompanied Kibaki’s electoral triumph and assumption of office a year earlier. Then, it seemed, Kenya was well on the way to slaying the proverbial corruption dragon. Kibaki and his National Rainbow Coalition allies, including Raila Odinga, had built their campaign on an unabashedly anti-corruption platform, promising to end the plunder the country had experienced under his predecessors, Jomo Kenyatta and Daniel Arap Moi.

Their campaign against Moi’s “project” to install Uhuru Kenyatta as his successor, brought together many of the leading lights of the decades-long agitation against the KANU dictatorship (and not a few opportunistic politicians). Their sweeping victory raised expectations for change to stratospheric levels. Imbued with the belief that all was possible, that they were “unbwogable”, Kenyans were arresting corrupt policemen on the street and expecting their new government to start doing the same to corrupt politicians.

However, the revelations of continuing theft in high place coupled with the de facto immunity afforded to Nyayo era thieves, would bring such hope crashing down to earth. And there seems no end to the hangover from those euphoric days, each election has bought a government more corrupt than the last.

How did we come to this?

In their insightful book Why Nations Fail: The Origins of Power, Prosperity and Poverty, Daron Acemoglu and James Robinson identify the nature of a country’s institutions, whether extractive or inclusive, as the primary determinant of its success. But unlike Kenya, where we equate institutions to an alphabet soup of organisations, Acemoglu and Robinson describe institutions as simply the rules, written and unwritten, that influence how systems work. Countries where such rules encourage participation by the masses, distribute political power broadly and subject it to constraint will tend to be successful whereas, as Kenyans can attest to from experience, those where the distribution of power is narrow and unconstrained will end up with systems geared to enrich a powerful few at the expense of the rest.

The primary reason why Kenya’s war against corruption remains little more than words on paper is because we are focused on changing personalities and organisations rather than the rules, or institutions, that underpin the system we inherited from the British colonials. In 1963 it was all about getting rid of the “colonial masters”. Half a century later, it was all about “Moi must go”. As the report of the Truth, Justice and Reconciliation Commission demonstrated, the rules of the game remained mostly unchanged. The government still functioned as a vehicle of plunder, with the only difference being that in place of white oppressors, we had black ones.

The inauguration of a new constitution in 2010 was the first real effort to address this system but here again, form is triumphing over substance. The fact of its passage continues to be hailed as a success (and it is) even as its spirit is crushed. Nominally independent institutions, such as the police and the Director of Public Prosecutions, remain, for all intents and purposes, subservient to the Presidential whim. Parliament, too, is little more than a lackey for the executive. The political sphere still largely excludes participation by most citizens in everyday governance while continuing to be the dominant influence over their lives. Impunity for wielders of political power is still the norm.

Passing the new constitution was just a necessary first step. As at independence, the real work lies in its implementation and in overthrowing the authoritarian substructure of the state to fit the aspirations the document espouses. This is where we are failing. The exclusive focus on prosecutions and convictions (which are necessary) sadly elides this.

That, Mr President, is what we want you to do.

John Githongo is wrong when he says “the era of fighting graft using public policy reform and technical fixes has ended.” We still need to think through how we make the system work for the masses of the people, and not just for a small elite. But he is right when he says it requires political will. Only what matters is not political will on the part of Uhuru Kenyatta but rather the political will of the Kenyan citizenry to hold him to account.