No More Partying At State House 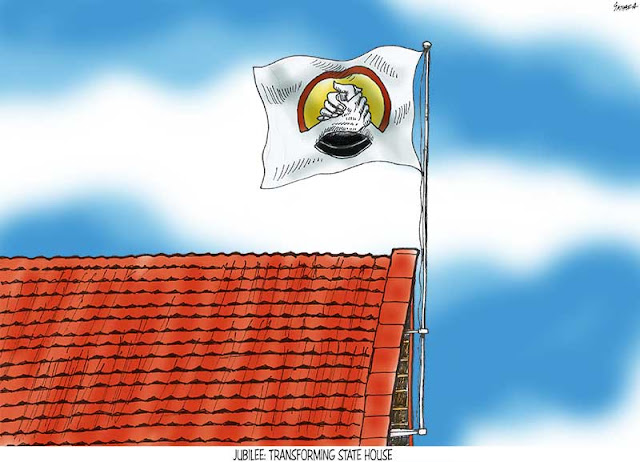 Earlier this week, President Uhuru Kenyatta summoned the press corps to State House to relay a message to the nation. However, he was addressing Kenyans, not in his capacity as the country’s CEO, but as a leader of one of 14 political parties affiliated with the Jubilee coalition.  The big news was, of course, that the parties had agreed to merge.

The choice of State House, the seat of the Presidency, as venue for what is plainly a partisan event was alarming. The constitution describes the President as “a symbol of national unity” but Kenyatta appears to be stretching the limits of this beyond what is acceptable. Party unity, even within the governing coalition, is clearly not national unity.

On the contrary, what the event highlighted is the creeping capture of the state by the party and the blurring of the lines between the two. And this is just the latest episode. The frequent and unseemly exchanges between the opposition Coalition for Reform and Democracy on the one hand and the Presidential Strategic Communications Unit on the other are legendary. They aptly demonstrate the latter's propensity to see themselves as more than just as civil servants working within the Presidency, but also as partisan agents of the Jubilee coalition.

One could also point to the curious case of Interior Secretary, Gen (RT) Joseph Nkaissery. I8 months ago, he was an opposition MP, having been elected on an Orange Democratic Movement ticket in 2013. Yet following his appointment to the Cabinet, he has been traipsing around his former constituency, pretending to be a member of the Jubilee coalition. So far, it seems, no one has asked whether he resigned his membership of ODM. It is almost taken for granted that going into cabinet automatically translates into joining Jubilee.

But why should this be of concern? Some on social media have suggested that the raging questions over the use of state assets were little more than just a storm in a teacup, a petty fuss over the use of microphones and presidential daises.  However, such thinking is dangerously ignorant of the lessons of Kenyan history. One of the reasons why the State House event left a bad taste in the mouth is the memory of the consequences of the fusion of the party and the state during the KANU era. That merger, which begun in the 60s under Uhuru Kenyatta's father and was completed under his successor, Daniel Arap Moi, was the foundation for a half century of abuses. As loyalties within government were steered away from serving the people and towards the party and its leadership, the state itself and the goods it held in trust for the people of Kenya were transformed into the personal property of the President.

In a very real sense, the cult of personality and the concentration of power in the person of the President that was engendered by Jomo Kenyatta, Moi and to a lesser extent, Mwai Kibaki, was essentially built on this fusion of party and state. Its legacy lives in the present day, when even nominally independent officials are loathe to go against the governing party line. The clearly partisan behavior of the police is a good example.

Further, as they say, the fish rots from the head. Other public officials will take their cue from the President. During the Al Shabaab attack on Garissa University, in which 148 people were killed, the elite GSU Recce Company was delayed in Nairobi as the police plane had apparently gone to Mombasa to fetch relatives of the Airwing commandant.

Separating the President’s personal and party affairs from that of the people is therefore no fickle matter. When asked about the appropriateness of hosting partisan political functions at State House, the President’s men are wont to point at US President Barack Obama's similar use of the White House. But while true, they neglect to mention that his party actually pays the US Treasury for the privilege, just as Obama pays for the daily meals, groceries and toiletries that he and his family get and use at the White House. Further, federal law prohibits federal employees and even elected representatives, admittedly excluding the President and Vice President, from conducting partisan business such as making fundraising phone calls, inside government buildings.

The Americans are certainly clear about the privileges their potentates are entitled to and go to great lengths to ensure public resources are not expended on party business. It is time we in Kenya followed suit.
Posted by Gathara at 10:34 AM