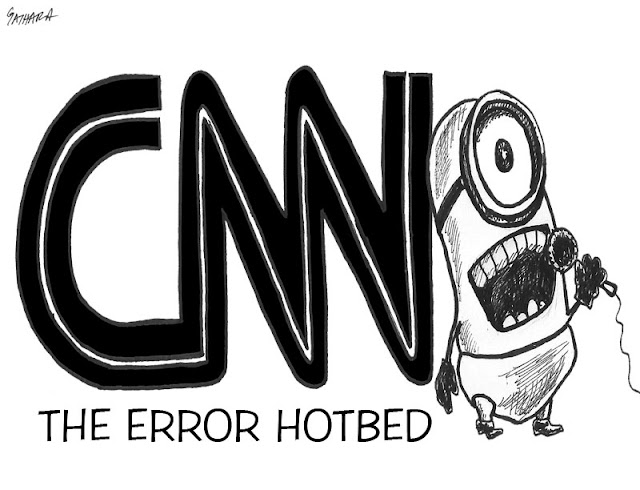 As Kenya prepares to welcome President Barack Obama, it's famously noisy social media collective has been thrown into a tizzy by a CNN anchor alleging the country is "a terror hotbed" and "one of the most dangerous countries in the world". This is not the first time the network has run afoul of Kenyans On Twitter or "KOT" as we like to refer to ourselves. The hashtag #SomeoneTellCNN has been employed several times over the last few years to punish the network for perceived misreporting on the country.

The latest kerfuffle comes hot on the heels of last week's humiliation when the Italian Prime Minister wore body armor under his suit when he went to meet President Uhuru Kenyatta at State House. Now, while Nairobi is not Mogadishu, the Italian and CNN theatrics notwithstanding, if we are completely honest with ourselves, we would admit that there is good reason for the world to worry about our commitment to staying that way.

Just last week, we celebrated the re-opening of the Westgate Mall, scene of a massacre of at least 67 people by at least four militants from the Somalia-based Al Shabaab terror group. The reconstructed building was hailed as a monument to resilience and the triumph of the Kenyan spirit.

Any mention of the many failure on the part of the government and its security agencies or the deliberate disinformation, scapegoating and cover up that followed, was conveniently edited out of the narrative. It is all very reminiscent of President Uhuru Kenyatta’s error-strewn statement in the aftermath of the attack declaring we had “ashamed and defeated” the attackers, even as evidence of the incompetence that led to the deaths of so many was beginning to emerge.

In fact, what little local discussion there has been of Westgate over the last two years has tended to echo such sentiments. The official version of events has received little examination, despite the gaping holes that resist both spin and a tidy denouement. Even official statements that should give some pause for thought don’t appear to elicit as much as a batted eyelid. Like when senior police officers admit the learnt nothing from the attack; or the Red Cross suggests more than 67 may have died and that it still cannot account for 18 people; or when DNA tests fail to identify bodies recovered from the mall as those of the terrorists.

The relentless tendency to downplay failures has continued to be a feature of the government response to terrorist attacks since Westgate. What is puzzling is why other players and institutions, including the media and the opposition are seemingly loathe to demand answers. Security failure, even when acknowledged, is discussed in vague and bombastic terms. Solutions, when they are proposed, tend to have little to do with actual security problems.

Thus Kenyans must endure, on the one hand, an administration that keeps committing the same errors over and over again, that appears incapable of learning and adapting, and that addresses the problem primarily as a public relations, not security challenge. On the other, a feckless and witless opposition and media, unable or unwilling to articulate security issues in anything other than political terms. Only sporadically, within the largely silenced civil society, does the issue come up.

Given an atmosphere where important questions do not get asked and when they are, never get answered, it is perhaps not surprising that the premium is placed on moving on. And this, more than anything else is what the reopening of Westgate represents. A defiant, fatalistic and stoic acceptance of the reality of terrorism and of the inevitability of government and institutional failure.

This is perhaps why there is little interrogation of what resilience is supposed to mean. It is much more PC to praise Kenyans for venturing back into Westgate than to discuss their fear of confronting their own government and of demanding an accounting from those whose job it is to protect them. Few want to expose what is being called resilience for what is really is: resignation. A negation of the idea that Kenya could do better. Today, few Kenyans believe safety from terrorists is to be found in the assurances of government or its security agencies. Long ago, many turned to prayer or, for those who can afford it, to Israeli security consultants.

As the stores reopen and life goes on pretty much as it has before, with perhaps a few more cameras and security screens. But there can be no relief from the realization that the many who died at Westgate died in vain. Their passing, while tragic and much lamented, has resulted in little change. And because of that, many more who could’ve been saved, in places like Mpeketoni, Mandera, and Garissa, have instead perished.

So as we pile into CNN, we might also want to take a minute to do some much needed introspection. And beyond hunting for compliments at the gleaming Westgate storefronts, we should peer into the dark basement and ask the uncomfortable questions.
Posted by Gathara at 9:10 PM

In the small dog eyes of the white ghosts, everyone else is the enemy ie China, Russia, Africa, the Middle East, South America. It never ends.

So as paid parrots they would pounce on any chance they see to attack them, which is why I am no longer interested to read about their targets in the english language.

Even if their half-white gay-suspect president comes to his home to say a few words I do believe every Africa nation has the potential to progress.

Whilst corruption is a major concern but I believe for the most part on the continent, tribal warring scores even higher. I am not saying corruption is correct, but because of this unresolved problem even the initial well-meaning politicians who got in and felt their way around were convinced that there was no way to grow the economy - they could well be serving people from enemy clans and tribes and so they decided to look after themselves first.

All that has happened tells you that hatred gains nothing and only destroys, particularly in this case. Dealing with colonial oppressors who later imposed apartheid is a national duty, but otherwise, attacking your own - as a whole - is foolish. They have no money for bread, but they sure have lots for firearms.

Anyway I hope Africa - no matter how it is perceived by everyone, would improve and the people happy.