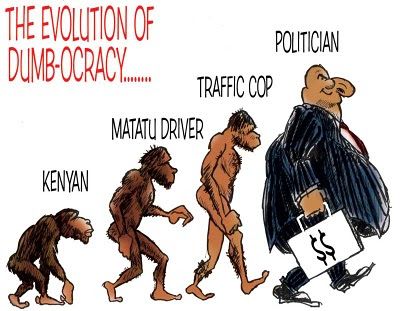 why not send this to one of the papers? or they just wont publish such an exposition?? from reading the "blog comments"on Nation....one would be 4given 4 concluding that kenyans, generally, are idiots who have no idea where their interests lie!!!!(except those in power...who myopically assume they know how best to cover their interests!!). I also quit this bitch! Lol!

Ok, Gathara, I hear you loud and clear.

Believe you me, these are my sentiments exactly.

However, and here's the kicker, how exactly are you quitting?

What will you do differently?

Or what will you do in quitting?

You've hit the nail of the head!

I agree completely with the sentiments of frustration in this powerful piece.

But if I can echo the words of one of the few (if not only) prolific leaders we have in place: "If I don't do it [take the steps towards transforming our country] who do I expect will? We have to have hope, there is no other Kenya, it is only this one, and it is all I have, and I will work to preserve and give it a future"

I once asked Martha Karua why she chooses to fight and that was the response she gave me. So, Gathara, before you "Quit this Bitch"...just remember...'we only have one Kenya. If we [you and I] don't take care of it, who will'?

I wonder what if the first figure, if illustrated as a regular human being, wouldn't reveal better the undelaying truth: all average humans beings have initially a hopeful potential.

The ruling elite will always have it their way.