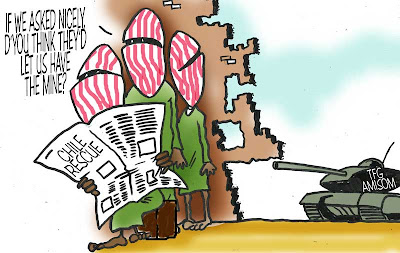 Two weeks ago, the African Union’s Peace and Security Council recommended that the mandated strength of its peacekeeping mission in Somalia (AMISOM) be raised from 8000 to 20,000 troops. It also called on the international community to blockade Somali ports and enforce a no-fly zone over the country to interdict resupply for Islamist rebels fighting to overthrow the internationally recognized government.

As the UN mulls over this proposal, events on the ground continue to give an indication of the effect increased troop numbers can have.

Since 2007, AU peacekeepers from Uganda and Burundi have been deployed in Mogadishu under both an AU and UN mandate and at the invitation of Somalia’s Transitional Federal Government. Their task is to support the decade-long Somali peace process and the transitional institutions it has generated.

For much of this time, AMISOM has been seriously under-resourced and undermanned. Nonetheless, the troops succeeded in their foremost task of protecting the Transitional Federal Government from Al Qaida liked extremist groups who have foresworn the peace process. In July, however, the Inter-Governmental Authority on Development resolved to send a further 2000 troops, bringing the AU mission to its mandated strength of 8000. By mid-August, half of the IGAD troops had been inserted into Mogadishu and the effect have been quick and dramatic.

In June, the TFG controlled just 5 districts in the capital. Now, with the support of the IGAD reinforcements the TFG has managed to gain ground and now controls nearly half of the capital’s 16 districts. The gains are all the more remarkable considering that they were made in the face of a so-called “terminal offensive” launched by the extremist group, Al Shabab during the Islamic holy month of Ramadan.

These successes have provided a springboard for the TFG to launch its long-awaited offensive to retake the rest of the country. Last week, the TFG and its allies captured Beled-Hawo, a southwestern Somali town near the Kenyan border, deep in the heart of al Shabaab territory - a huge blow to the insurgents’ image of invincibility. Government forces are now at the doorstep of the strategically important town of Beled weyne, Hiiraan’s regional capital, threatening the insurgents’ grip over South and Central Somalia.

The losses suffered by the insurgents have amplified clan divisions and disputes over command, the policy of denying access to humanitarian organizations trying to help the suffering population in Central and South Somalia, and the role of foreign fighters. According to the Jamestown Foundation, a Washington think tank that monitors global security, the failure of the Ramadan offensive, led to “a major rift between Al Shabab’s emir, Sheikh Ahmad Abdi Godane and his deputy, Sheikh Mukhtar Robow.”

This is significant because, as US global security consultancy, Stratfor, says, it represents a split between the group’s nationalist and internationalist elements. According to Stratfor, Godane “is considered the leader of the internationalist elements, coordinating closely with foreign jihadists from al Qaeda who have joined its ranks over the last few years,” and is “responsible for propelling the Somali theater onto the global jihadist radar.”

Stratfor however notes that fighting to bring the global jihad to Somalia and basing such efforts in Somali territory is deeply unpopular, and the group has been at pains to hide their intentions under the guise of nationalism. A split with Robow, one of the more nationalist voices, and who had previously been replaced as the group’s spokesman in 2009 following his opposition to the policy of denying access to humanitarian organizations trying to help the suffering population, would not only significantly weaken Al Shabab, but also rob them of this platform.

Meanwhile, the TFG is exploiting the space created by the AMISOM deployment to deliver some services to people in Mogadishu and beyond. At the end of August, the Independent Federal Constitution Commission produced a draft constitution and submitted it to the people for consultation. The Mayor of Mogadishu, Mohamed Nur, is rehabilitating roads, providing street lighting and rebuilding markets in the capital. He has recently submitted a 4 year plan for regenerating the city to our development partners, the first time this has ever been done.

The people of Mogadishu are voting with their feet, and most of the city’s 2 million people now live in areas controlled by the TFG, many having moved there to escape the ‘reign of terror’ offered by the al Shabab. Even in areas not yet under their control, the TFG is, according to Prof. Abdullahi Sheikh Ali, Minister of State for Planning and International Co-operation, working with community elders and non-governmental organisations to launch projects such as the rehabilitation of canals in Hiiran area and Middle Shabelle.

Much of this progress, though, is sadly undermined by continued political disagreements and wrangling within the government. A few weeks ago, the Prime Minister was deposed and the process of selecting a replacement has been afflicted with delays and held hostage to disputes between the President and the Speaker. However, it is instructive to note that, while regrettable, the conflicts within the TFG are being mediated through political and constitutional processes, a clear break from the past preference for violence and war.

All this has been achieved by the insertion of just 1000 extra soldiers. Imagine the impact of sending twelve times that number.
Posted by Gathara at 9:27 PM

Somalia is an African problem and although we could to US/EU support on the seas, I see it as a win-win situation for Africa if we can come with a game plan to rout the al shabaab in its backyard.

Whatever it is, Al Shabaab is not al-qaeda and its beatable

Hahahaha, I am from Chile, nice joke from the artist. Al-Shabab can have that damned mine if they wish so, it's still giving to the 32 + 1 a ton of legal and psychological problems until today (the Chileans and the Bolivian miner), and as for the threat Al-Shabab is giving to Somalia and its neighbours my country would have ended it, with more than brief and sheer lethal force, knowing the Chilean Armed Forces' reputation.