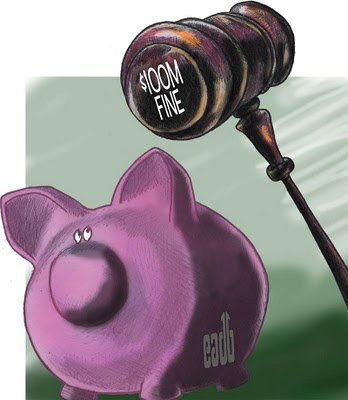 As the East African Development Bank fights for its life in Tanzanian courts, its role as the East African Community’s Bank has come under fire. The Permanent Secretary at Kenya’s Ministry of East African Community blames a lack of vision by the leadership of the East African Development Bank for the failure to mobilize resources for cross-border infrastructure projects. Speaking to The East African, David Nalo stressed that the bank “needed to be reformed yesterday”, citing the example of the Athi River-Arusha road. The project took over ten years to kick off because each country was separately negotiating with donors to finance its chunk of tarmac. “The EADB should have repositioned itself to offer solutions as the Bank of the EAC to source the funds and execute the project,” the PS says.

The bank is appealing a $61 million arbitral award given against it to Tanzanian transporters, Blueline Enterprises Ltd. Its numerous attempts to have the award set aside have been dismissed on technicalities. According to lawyer Kibe Mungai, in 5 years of litigation, the case has never been heard on its merits.

Though its lawyers have warned that the institution may not have the resources to pay and may face the prospect of liquidation if all its appeals are unsuccessful, the bank is now seeking to reassure “all stakeholders” that its operations will continue. In a Press release, the bank declares that the EAC Partner States, who own over 80% of the bank as well as non-state shareholders “remain firmly committed to the EADB and will continue to support it.” This is despite the fact that the member states have already eschewed the idea of shelling out taxpayer cash to “pay a private businessman”.

The African Development Bank, which owns close to 7% of the EADB has declared that it is 100% behind the Bank. Though he would not be drawn out on the subject of a bailout, Bhargav Purohit, who represents the African Development Bank on the EADB’s Board of Directors, said the AfDB would support the EADB in its time of need. “We will be here to work with them as we have been for the last 40 years,” he declared.

PS Nalo believes East Africa must make a strategic choice between the proposed the East Africa Community Development Fund and restructuring the EADB to avoid “duplication.” Declaring that the EADB is potentially “an extremely useful instrument,” he advised the Bank’s management to start thinking about funding infrastructure projects such as a fibre optic cable from Mombasa to the DRC or a nuclear power plant, or mobilising equity and capital for renovating the railway system.

Purohit, though, observes that the Bank’s role is still defined by the 1980 Charter and any changes in its mandate would need to be reflected there. He believes that to properly perform its new role, the EADB would need to be restructured and adequately capitalized. He further adds that a strategic plan is currently being worked on by the Director-General and her team and it will include recommendations on the requisite level of capitalization.

Interestingly, in 2008, The EastAfrican reported that a $135 million recapitalisation package was yet to be realized and Nalo feels that partner states will remain unwilling to recapitalize it until it is restructured and shows readiness to delve into regional issues.

The bank has had a troubled history, having undergone at least three bouts of restructuring within the last two decades, mostly following losses. It was first restructured in 1993. Between 1994 and 1998, it had a good run, doubling its profits. This was followed by a period of deterioration which culminated in a $2.9 million loss in 2002, prompting another restructuring and the departure of 5 top managers. The latest facelift comes on the back of an $8 million loss in 2008 which led to the removal of its top brass including the Director-General.

One of the few remaining vestiges of the original East African Community, the Bank was created by Article 21 of the Treaty for East African Co-operation of 6 June 1967 and its Charter was set out in Annex VI of the Treaty. Its main purpose was to promote the equitable industrial development of the three member countries, Kenya Uganda and Tanzania. While the three countries contributed equally to its capital base, the bank was required to devote 38.75 per cent of its investments in each Tanzania and Uganda, against 22.5 per cent in Kenya.

However, under its statutes, it could only finance “viable” projects, most of which were in Kenya, especially during the 1971-73 period. This, and the absence of coordinated industrial planning in EAC, greatly limited the bank’s ability to effectively redistribute the benefits of the integration.

The EADB survived the dissolution of the EAC in 1977 largely because it did not rely on the EAC for funding. Headquartered in Kampala, Uganda, the bank was revitalized by a then rare show of unity when Kenya, Tanzania, and Uganda momentarily set aside their differences in an effort to bolster the bank's activities.

The Treaty Amending and Re-enacting the Charter of the East African Development Bank,which came into force on 23rd July 1980, rescued it from legal limbo. It provided that the EADB Charter would henceforth draw its legal validity from the 1980 agreement and not the 1967 Treaty which founded it. Under the new charter, in addition to promoting industrial development, the bank could also provide funding and technical assistance for agricultural, forestry, tourism, transportation, and infrastructure development projects. It had an authorised capital stock of US$ 1.08 billion though to date it’s actual paid-up capital remains at less than 10% of that figure.

In 1984 the International Monetary Fund agreed to provide further financial backing and by the late 1980s the African Development Bank and the Japanese government agreed to channel $56.4 million in credit through the EADB for regional projects. By 1990 the EADB had lent $28 million for 19 separate projects, but many of these and other loans were soon in arrears. Many of the bank's problems were blamed on currency devaluations and various technical financial adjustments. In 1993, the EADB agreed to a complete restructuring under the guidance of a new director general.

That same year, Kenya, Uganda and Tanzania took another crack at regional integration by forming the Permanent Tripartite Commission for East African Co-operation. The Treaty for the Establishment of the East African Community was signed in November 1999 and entered into force in July 2000. The EADB, along with other remnants of the 1967 Treaty, was declared an Autonomous Institution of the Community. The bank was charged with catalyzing regional integration through the provision of development finance.

The 2nd EAC Development Strategy which covered the years 2001-2005, recognized a gap in regional financing for regional projects, citing low savings and incomplete financial reforms. To plug this hole, the Strategy recommended establishing a Regional Development Fund with the EADB used as a transitional vehicle for raising funds for regional projects before the Fund is up and running.

While this seems to suggest that the Bank is of limited value, at least as far as EAC integration is concerned, a paper tabled at the July 2008 UN Conference on Trade and Development notes that given the important imperfections of private international capital markets, especially in the provision of long-term funding – such as is required for infrastructure – Regional Development Banks and Sub- Regional Development Banks such as the EADB need to play an ever increasing role in financing regional infrastructure.

Financing from Multilateral Development Banks such as the World Bank tends to come with strict conditionalities, give little regard to the views of developing countries, and are heavily influenced by the agendas of their shareholders’ domestic constituencies. RDBs and SRDBs on the other hand, can rely on informal peer pressure rather than imposing conditionality allowing for faster and more flexible disbursements of resources. There is also little danger of countries’ voices been drowned out in a bank they themselves own, or their being held hostage to foreign agendas.

RDBs and SRDBs can also help ameliorate the vagaries of international private finance by providing counter-cyclical finance when private flows dry up and developing innovative market instruments, such as GDP-linked bonds, that better spread risks and reduce the likelihood of costly and disruptive defaults and debt crises.

Therefore, while the EADB has financed numerous projects in different sectors within the region including education, agriculture, agro-processing, construction and real estate, health, transport and telecommunications,it needs to expand its portfolio to include financing regional integration efforts and especially the cross-border infrastructure. Just as the EAC is following the EU integration model, so the EADB should look carefully at the example set by its counterpart in Europe, the European Investment Bank.

The EIB was central to the process of European integration since the beginning. Indeed, just like the Treaty of East Africa Cooperation created the EADB, the 1957 Treaty of Rome that created the European Economic Community also created the EIB. The EIB, the most powerful instrument in the Treaty, was established in order to support the European integration process. It had a three-fold mandate: to ensure equitable development by channeling savings from the more developed parts of the Community to the less developed parts; to help modernize or replace “senile industries”; and to develop cross-border infrastructure by transforming Europe’s essentially national infrastructure into an integratedEuropean infrastructure.

To fulfill a similar role, the EADB needs to extend its portfolio to include financing of regional infrastructure projects. As the Deputy Governor Bank of Uganda, Dr. Louis Austin Kasekende notes, “the EADB… lends money to commercial enterprises to fund their capital investment and working capital. Most of these enterprises are in the private sector although a few are public enterprises and joint ventures.” In contrast, in its first ten years, the EIB lent almost exclusively to infrastructure and industry with the former accounting for nearly half (48%) of its total disbursements. In the SADC region, the Development Bank of South Africa also focuses primarily on its core mandate of infrastructure funding.

In some ways, though, the EADB is already set up to finance infrastructure. Such funding typically requires long-term loans. While the liberalization of financial markets and the rapid increase in the number of commercial banks in the financial system has largely improved availability of short-term as opposed to long-term credit, the latter accounts for well over 80% of the loans approved by the EADB in any given year. However, it needs to ramp up the scale of its lending. After a relatively modest start while it found its financial feet, the EIB now shells out more credit than the other multilateral banks put together. The EADB’s annual disbursement, on the other hand, is woefully small -in 2008 it was less that the amount Kenya’s Higher Education Loans Board advanced to the country’s students!

The EADB must also attend to its redistributive function just as the EIB funneled resources to the poorer sections of Europe. In fact, before joining the European Economic Community, Italy pressed for the creation of the EIB largely to help fund infrastructure in its Southern region. In contrast, between 1995 and 2006, the EADB’s approved investments were evenly split between Kenya, Uganda and Tanzania. The bank must revisit its roots and especially the requirement to ensure the fruits of integration are equitably distributed. Though Nalo is opposed to this, preferring policy incentives that encourage private sector investors to view the region as a single entity, he acknowledges that the EACDF does contemplate a mechanism of compensation for losses incurred due to the integration project and proposes that such mechanisms be included in a revised EADB Charter.
Posted by Gathara at 11:20 PM