Redeemer vs Teacher: Towards the United States of Africa 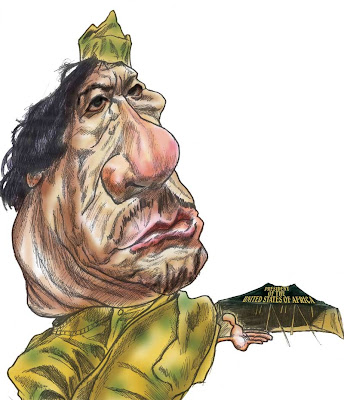 African Union summits rarely escape a Muammar Gaddafi lecture on his pet project: the United States of Africa. The Libyan leader’s harping on the need for common government is derided by some as a plot for hegemony. The idea of continental unity, though, is not new and neither is the cynicism.

In a sense, Gaddafi is unwittingly summoning us to our etymological roots. The original meaning of the word “Africa” may be unclear, but, in ancient times, it referred only to the north coast of the continent, replacing the Greek word "Libya," to refer to the land of the Berbers.

It only encompassed the whole continent from the end of the first century BC. As it did so, it was slowly divorced from North Africa and soon confined to the region that, in less politically correct times, was also called Black Africa. According to Paul Tiyambe Zeleza, professor of African American Studies at the University of Illinois at Chicago, the conflation of Africa with sub-Saharan Africa “ultimately offer[ed]a racialised view of Africa as the ‘black’ continent... from which North Africa and especially Egypt [was] excised and attached to Europe.”

“Africa” no longer described a geographical entity, but was imbued with ideas of blackness and a mystical cultural unity. The transatlantic slave trade and the consequent forced immigration of millions of “black” Africans served to spread and cement this association abroad. On the continent, European colonisation had much the same effect. As Mwalimu Julius Nyerere observed, “Africans all over the continent, without a word being spoken either from one individual to another, or from one country to another, looked at the European, looked at one another, and knew that in relation to the European they were one.”

Slavery and colonialism also gave rise to Pan-Africanism, the idea that black Africans and their descendants belonged to a single "race," and shared both cultural unity and historical fate (a notion rejected by black American actress Whoopi Goldberg in 1998 when she declared: “I dislike this idea that if you're a black person in America, then you must be called African-American. Listen, I've visited Africa, and I've got news for everyone: I'm not an African. The Africans know I'm not an African. I'm an American.”)

Refined by the writings of Edward Blyden, W.E.B. Du Bois, and Marcus Garvey, Pan-Africanism became the orthodoxy among the emerging class of political reformers on the continent. The 5th Pan African Congress, organised in 1945 by Ghanaian leader Kwame Nkrumah, was attended by many scholars, intellectuals and political activists who would later become influential leaders in various African independence movements including Kenya’s Jomo Kenyatta, Malawi’s Hastings Kamuzu Banda, and Nigerian leaders Obafemi Awolowo and Jaja Wachuku.

While generally endorsing the Nkrumah’s ideas on cultural and historical unity, the soon-to-be-all-powerful-potentates viewed political unity as a different proposition. In May 1963, many of them were among the 32 heads of state and government meeting in Addis Ababa to sign the Organisation of African Unity Charter, whose preamble prophetically stated 'we the heads of state' rather than 'we the people'. When Nkrumah simultaneously released his book, Africa Must Unite, (undoubtedly thinking it was appropriate for the occasion), the assembled presidents suspected an attempt to dominate the continent and realise Nkrumah’s ambition to become the president of a United States of Africa. As Nyerere later remarked, once “you multiply national anthems, national flags and national passports, seats at the United Nations, and individuals entitled to 21 guns salute, not to speak of a host of ministers, prime ministers, and envoys, you have a whole army of powerful people with vested interests in keeping Africa balkanised.”

The Tanzanian leader was opposed to Nkrumah’s approach. A strong proponent of East African federation, Nyerere regarded regional integration as the more realistic way to achieve continental unity. Nkrumah was implacably opposed to what he called “balkanisation on a grand scale” and deemed Nyerere a rival to his leadership of the continent, one who might eclipse him as the first African leader to successfully unite independent countries, following the failure of Nkrumah’s own Union of African States.
For his part, Nyerere dismissed Nkrumah’s opposition as “attempts to rationalise absurdity.” In fact, so eager was he for regional integration that he repeatedly told Jomo Kenyatta, the least interested of the three East African leaders, Tanzania would renounce its sovereignty right away if Kenya were ready to unite. During the 1965 Commonwealth Conference he declared that “if Mzee Kenyatta today says he is ready, then we will federate tomorrow.”

That, of course, never happened and the search for political unity soon took a back seat to moves towards economic integration. The 1980 Lagos Plan of Action for the Development of Africa and the 1991 treaty to establish the African Economic Community (also known as the Abuja Treaty), proposed the creation of Regional Economic Communities (RECs) as the basis for African integration, with a timetable for regional and continental integration to follow. The AU, established in July 2002 (at Gaddafi’s behest) to replace the toothless OAU, today recognises eight RECs including the East African Community.

Still, the rhetoric of political union remains. A 2006 study adopted by the AU proposed a three-phase, nine-year roadmap to the United States of Africa commencing “immediately after the decision of the Assembly at the next session of the AU summit” in Accra, Ghana. However, at the 2007 summit, the old arguments over regional versus immediate continental unification resurfaced with some (notably Libya) advocating a common government with an AU army; and others (especially the Southern African states) preferring to strengthen AU bodies and make them truly effective.

Following heated debate, the Assembly of Heads of State and Government issued the Accra Declaration, recognising the US of Africa with a Union Government as the ultimate objective of the AU and proposing steps towards this including rationalising the RECs and reviewing their relationship to the Union Government of Africa. All mention of a timetable disappeared. No AU Summits since have taken any firm decisions on the plan, each deferring the issue, for “final” debate to the next meeting.

Meantime, the RECs are pursuing further integration. They are linking up to fulfil the century-old dream of a trade zone spanning the length of the continent. In October 2008 SADC, Comesa and EAC, announced an agreement to create the African Free Trade Zone, grouping 26 countries with a combined GDP of $624 billion.

To quote Prof Zeleza, “‘Africa’ the map and the place is becoming increasingly ‘Africa’ the idea and the consciousness, buttressed by an intricate web of continental institutions.” In the second decade of the 21st century, the continent is “perhaps more ‘African’ than it has ever been… more interconnected through licit and illicit flows of commodities, capital, ideas, and people... more conscious of its collective identity.” As the pressures of globalisation continue to buffet and mould the continent, as they always have, a continental economy and, eventually, government is inevitable — with or without Gaddafi’s harangues.
Posted by Gathara at 3:28 PM

interestingly, an AU official from addis ababa, last summer at a conference in Freiburg Germany, walked out when pressed to define "Pan africanism" in todays' context. was it the same as envisaged in 1960s and 70s or was it an evolved concept?? this was very embarassing coz it was a fair question that required an answer. but when gadaffi is the first to one ask for "extended chairmanship ..against the treaty rules", what am i to make of the conceptual principles and aims of a united states of africa?

Hi, ur blog is really interesting, while reading it I truly like & enjoy it . I just wanna suggest that u should go for blog advertising & marketing there is a website which is offering very unique features at affordable prices there are expert advertising team who will promote ur blog & affiliate ads through all over the networks. Finally I have bookmarked ur blog & also shared to my friends. i think my friend might too like it hope u have a wonderful day & !!happy blogging!!.

I just bumped into your site. Very informative. I shall become a follower. Keep it up