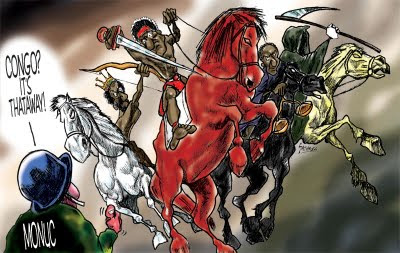 MONUC, the United Nations Mission in the Democratic Republic of Congo, the largest and most expensive UN mission in the world, has just marked its 10th anniversary. Established in November 1999, and despite maintaining, at present, close to 20,000 troops in the Congo at a cost of $1.4 billion a year, it has achieved little more than a bad name.

Next year the DRC, too, commemorates an anniversary: its Golden Jubilee. 50 years of independence, during which the country has singularly distinguished itself for the misery it imposes on its citizenry. President Joseph Kabila has asked that MUNOC present him with a withdrawal plan as a present. What is not clear is whether he intends to give long-suffering Congolese people a respite from his and his fellow butchers-in-arms' warmongering.
Posted by Gathara at 12:07 AM