The Insults of the Earth 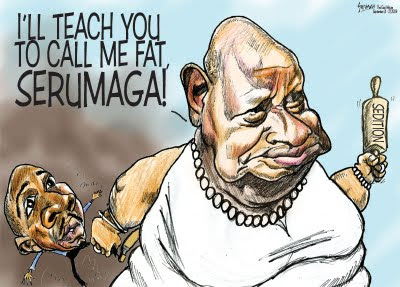 “I call on all Ministers and Assistant Ministers and every other person to sing like parrots. During Mzee Kenyatta’s period, I persistently sang the Kenyatta tune. [When] people said ‘This fellow has nothing to say except sing for Kenyatta,’ I said I did not have ideas of my own. Who was I to have my own ideas? I was in Kenyatta’s shoes and therefore I had to sing whatever Kenyatta wanted. If I had sung another song, do you think Kenyatta would have left me alone? Therefore you ought to sing the song I sing. If I put a full stop, you should put a full stop. This is how the country will move forward. The day you become a big person, you will have the liberty to sing your own song and everybody will sing it”.

Thus spake the then Kenyan President, Daniel Arap Moi, in what has to be the most eloquent exposition of the intent of sedition law ever uttered.

Historically, sedition is the crime of speaking words against the state. Its basic premise, that it is wrong to criticise the leadership, fundamentally flies in the face of the tenets of democracy which demand the ability to criticise leaders as a sina qua non for informed choice. In its modern meaning, the charge of sedition first appeared in the Elizabethan Era (c. 1590) as the "notion of inciting by words or writings disaffection towards the state or constituted authority". According to Curtis C. Breight, author of Surveillance, Militarism and Drama in the Elizabethan Era, sedition complemented treason and martial law: while treason controlled primarily the privileged and ecclesiastical opponents, and martial law frightened commoners, sedition was meant to cow intellectuals. Under English common law, a statement is seditious if it "brings into hatred or contempt" the Queen or her heirs, or the government and constitution, or either House of Parliament, or the administration of justice, or if it incites people to attempt to change any matter of Church or State established by law (except by lawful means), or if it promotes discontent among or hostility between British subjects. A person is only guilty of the offence if they intend any of the above outcomes and, interestingly, proving that the statement is true is not a defence. It is punishable with life imprisonment.

Thin-skinned African despots have recurrently deployed sedition legislation that derives from their UK and French colonial heritage to deal with dissent and to contain bothersome journalists. According to the World Association of Newspapers (WAN) , laws on insulting leaders are in force in 48 out of 53 African countries, and are "the greatest scourge" of press freedom on the continent. In the first five months of 2007, "insult" laws led to the harassment, arrest or imprisonment of 103 journalists in 26 African countries.

Last week’s brutal abduction and torture of Uganda's Radio One talk show host and The East African contributor Robert Kalundi Serumaga, and his release on bail after being charged with six counts of sedition, is only the latest incident. Serumaga who spent four days in police custody was accused by the state of “intention to bring into hatred, contempt and to excite disaffection against the person of the President” during a television show on September 11. Less than a month ago, 3 executives on the Ugandan bimonthly magazine The Independent were interrogated by police for four hours because they published an allegedly seditious cartoon that was critical of the president, Yoweri Museveni. One of three, managing editor Andrew Mwenda, is already facing a sedition charge from 2005, one of 21 criminal counts that he is fighting in the courts.

In 2005, Mwenda was arrested and charged with “sedition” and his employer, KFM Radio, was briefly banned after he commented on a possible Ugandan government role in the death of southern Sudanese leader John Garang while hosting a phone-in radio show. Among other things, Mwenda blamed President Yoweri Museveni and the Ugandan government for the mismanagement of Garang’s security after he died in a helicopter crash.

In Kenya, sedition laws (Section 56, 57 and 58 of the Penal Code) were repealed by the IPPG reforms of 1997. Prior to that, they were used to curtail any form of discontent, their enforcement sometimes verging on the ridiculous. For example, in 1990 Rev. Lawford Ndege Imunde was sentenced to 6 years imprisonment for “printing and possessing seditious publications exciting disaffection against the President or the Government of Kenya” after he noted in his desk diary that Robert Ouko was murdered with the connivance of the government.

Though Article 18 of the Tanzanian Constitution guarantees every Tanzanian the right to freedom of opinion and expression, the Newspaper Act of 1976 allows authorities within the government—including the president—the power to prohibit publications that might be deemed to not be in the nation's best interest. It defines an act, speech or publication as seditious if it aims to bring lawful authority into hatred or contempt, or excites disaffection against the same, or promotes feelings of ill-will and hostility between different categories of the population. Anyone printing or publishing a newspaper which contravenes these provisions is liable to face a fine or a maximum sentence of 3 years. In October 2008, the radical tabloid, Mwanahalisi, was banned for 3 months for allegedly publishing seditious articles. Information Minister George Mkuchika explained the rationale behind the ban thus: "The newspaper is fond of publishing articles that ridicule senior government leaders including president Jakaya Kikwete and the ruling Chama Cha Mapinduzi (CCM)."

Matters are not much better in the Democratic Republic of the Congo, where Nsimba Embete Ponte, editor of the biweekly L'Interprète, was last year handed a 10-month prison sentence for "insulting" President Joseph Kabila by referring to rumours about Kabila’s health in a series of articles. Arrested on 7 March 2008 in Kinshasa by members of the National Intelligence Agency (ANR), Ponte was held incommunicado for three months before being transferred to the main Kinshasa penitentiary.

In Burundi, Anaias Havyarimana and Honoré Misago were arrested in September 2008 on charges of insulting President Pierre Nkurunziza after they were overheard criticizing his education policy in a private conversation. They were both remanded in custody until their acquittal in December. In November , well-known former radio journalist and political activist, Alexis Sinduhije, was charged with “insulting the President,” based on a document found in his possession following an illegal police search during which a search warrant for different premises altogether was delivered two hours late, referring to a judicial file that did not yet exist. The recovered document purpotedly stated that “the responsibility for the corruption scandals and the assassinations ordered by the party CNDD-FDD lie with the man who passes his time in prayer meetings,” and, according to the prosecution, referred to and insulted President Nkurunziza, a born-again Christian.

Gambian law intimidates independent press through prison terms for reporters found guilty of sedition - broadly defined - or libel, and a requirement that newspaper proprietors must sign a US$16,600 bond (with their houses as guarantees) to be allowed to publish. In 2008 UK missionaries David and Fiona Fulton were sentenced to a year's hard labour over "seditious" email to friends in London in which they describe the Gambian President, Yahya Jammeh, a man who believes he can cure AIDS on Thursdays using herbs and bananas, as a “madman”. They were also fined £6,250 each. They pleaded guilty to charges of "printing, publishing or reproducing publications with intent to bring hatred or contempt or to excite disaffection against the president or the government".

In 2007, 5 journalists and a teacher were convicted of insulting Mali President Amadou Toumani Toure, and given suspended sentences over a school essay. Teacher Bassirou Kassim Minta had asked his final-year secondary school class to write a humorous essay about the mistress of a fictional African leader. He was arrested, along with Seydina Oumar Diarra, a journalist who wrote an article in the Info-Matin newspaper criticising the teacher for assignment. Following the detentions, the article was reprinted in other newspapers, leading to the arrest of the other journalists.

Côte d'Ivoire journalist Nanankoua Gnamanteh was brought before an Abidjan court in March this year on a charge of insulting President Laurent Gbagbo in an article that appeared in Le Repère under the headline "Ali Baba and his 40 thieves" together with a photo of the president and several of his close associates and referring to Gbagbo's period as president as "nine years of political fraud... outright theft, embezzlement and kleptomania at the summit of the state." The prosecutor requested a two-year prison sentence and asked the court to suspend Le Repère for eight months and to fine its publisher, Eddy Péhé, 10 million CFA francs (15,200 euros), despite the fact, as noted by Reporters Without Borders, that the country had decriminalized press offences. Gnamanteh and Péhé were fined 20 millions CFA francs (30,000 euros) each, and the newspaper was suspended for eight weeks.

Though Egyptian President Hosni Mubarak has pledged to amend the 1996 Press Law and abolish prison sentences for press offenses, that did not save Ibrahim Issa and Sahar Zaki, editor and journalist, respectively, of the opposition weekly Al-Dustur, who were each sentenced to one year in prison in June 2006 for "insulting the President" and "spreading false or tendentious rumours." The charges were brought by the so-called "ordinary people of al-Warrak," who were reportedly offended by an April 2005 article which reported on a lawsuit brought by a man from the village who accused President Mubarak of unconstitutional conduct and ‘wasting foreign aid’ during the privatisation of state-owned companies.

In Zimbabwe, even musicians have not been spared. Happison Mabika, and Patience Takaona, have been in hiding since last year when they failed to attend a court to answer charges of singing songs ‘too sensitive and insulting’ President Robert Mugabe. Their lawyer Charles Kwaramba later claimed that the duo were in fear for their lives. Although the country now has a coalition government, Dread Reckless and Sister Fearless, as they are better known by their fans, have not emerged. If convicted, the two face a two-year stint in jail.

In many jurisdictions across the globe, sedition is either formally or effectively a dead letter. Recognising that criminal sanctions for criticism of leaders should never be imposed, the British government has not charged anyone with sedition in over 30 years and has announced its intention to repeal the law. It is time African governments cottoned on to this. For too long, governments on the continent have used these laws "ruthlessly, to prevent critical appraisal of their performance and to deprive the public from information about their misdemeanours", as WAN put it. Ugandan journalist Andrew Mwenda succinctly captured the irony of the situation, explaining that “in a country that is a democracy (or pretends to be) and not a monarchy, it is my right to cause public disaffection against the person of the President or the government so that at the next election people can vote against both.”