Do We Really Need A New Constitution? 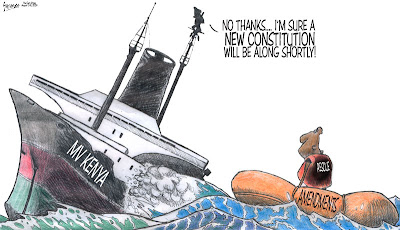 In the 90s, amid stringent calls for a people-driven constitution, Kenya embarked on a startlingly unique adventure: to replace its current constitution with a spanking new one. 2 decades and several billion shillings later, the journey seems no closer to completion. Throughout all this, one thing has remained a mystery to me. The called for changes could have been achieved far more cheaply and quickly through a series of Constitutional amendments enacted by Parliament without having to start the whole process from scratch. So why did we chose the vastly more expensive, and ultimately unfruitful, option? What's wrong with piecemeal amendments?

In a word: nothing. The 90s debate over "piecemeal" or wholesale people-driven constitutional reform obscured an important fact. The current constitution is itself the result of numerous amendments to the Independence constitution. In fact, in the 30 years between 1963 and 1992, the Kenyan constitution was amended 28 times. In contrast, in the same period the US amended its constitution all of 4 times, and has only done so on 27 occasions throughout its 200 year history.

Some will doubtlessly argue that piecemeal amendments would have suited our dear politicians who are only too fond of (ab)using the document to settle their political differences. After all, they would point out, the fact is the majority of the amendments to the Kenyan Constitution have addressed issues that were not of a constitutional nature.

According to “Amending the Constitution -Learning from History”, a paper presented by Dr. Githu Muigai at an International Commission of Jurists conference in 1992, the concept of the constitution and of constitutionalism were, to begin with, completely alien to Kenya. "The colonial order had been one monolithic edifice of power that did not rely on any set of rules for legitimization. When the Independence constitution was put into place it was completely at variance with the authoritarian administrative structures that were still kept in place by the entire corpus of public law. Part of the initial amendments therefore involved an attempt - albeit misguided - to harmonise the operations of a democratic constitution with an undemocratic and authoritarian administrative structure. Unhappily instead of the latter being amended to fit the former, the former was altered to fit the latter with the result that the constitution was effectively downgraded."

However, the comprehensive reform route has fared no better. For example, another reason for the constitutional amendments of the 60s and 70s was to strengthen the executive and through it the provincial administration as a possible panacea for the instability of the KANU Government. The divisions within the party and government were dealt with as if they posed constitutional issues. Sound familiar? In this decade we have seen this re-enacted. The debate in Bomas over the proposed powers of the office of the Prime Minister was largely defined by the divisions within the NARC coalition. The infamous MoU, a power-sharing agreement between politicians, was suddenly the centre of a constitutional controversy. In fact, the 2005 referendum was less about the Constitution, and more about the internecine struggles within NARC.

In the light of the foregoing, it is plain that the long-term process of shaping and reinvigorating our constitution has been hijacked by the short term interests of the political classes. And while our politicians are not to be relied on when it comes to promises of a new constitution, in the service of their stomachs they have demonstrated that piecemeal changes are a most efficient means of effecting change.

Over the last 15 years, we have witnessed a number of amendments that have improved the constitutional climate without requiring referendums and view-collecting. Now, as the Committee of Experts on Constitution Review sets about spending a further 300 million to tell us what we already know, perhaps we should rewrite their mandate. Why don’t they simply propose certain specific amendments to the current constitution, which amendments Parliament could speedily (and inexpensively) undertake? Thus we can quickly ring in badly needed renovations to our constitutional facade before the next elections.
Posted by Gathara at 11:36 PM

We don't even adhere to the current constitution in many ways so having another with our law-breaking attitude seems unnecessary and expensive.

True, the politicians and their party apparatchiks have managed to turn the constitution into a 'con situation' where promises of its amendment makes votes trickle in. We don't need a new 'constitutional dispensation' to quote one of those sugar coated cries.

Whilst we are at it, we need a new thinking by the people so that we can stop holding up 'We have bad MPs' slogans when we -ourselves- elect the whole caboodle of them; when we let good people not serve us and instead let ourselves serve these jokers etc etc.

This is a great site that you have here. I have a debate blog myself and I would like us to exchange links. We have to stick together. Let me know. Jason