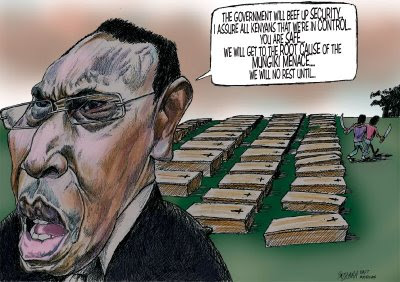 Proficient at procuring easy and expensive (to us) solutions to political problems of their own making, our rulers are often clueless when confronted with real-life (and death) issues. The reaction to Monday's killing of 29 people in Gathaithi village has just served up more proof of this.
Distracted by meaningless power games, all a supposedly "concerned" President Mwai Kibaki could serve up on Tuesday was a directive to Internal Security Minister George Saitoti to get to the root cause of the Mungiki menace. This "urgent" directive came 25 years after the group's emergence, nearly a decade after it was proscribed, and after thousands have been killed and maimed by the criminal gang with pretensions to cultural awakenings.
Similarly distracted, Prime Minister Raila Odinga, leading a high level government delegation to Gathaithi, was full of vague promises of "beefed up security" and offers to foot the funeral costs for citizens who, but for official negligence, would still be alive today.
Death has been stalking Central Province for the last few weeks as vigilantes went after suspected Mungiki. With almost daily reports of murders and arson, the official reaction has been both muted and confused. The provincial administration seemed only too eager to help the vigilantes, even offering to issue them with ID cards. The Commissioner of Police, on the other hand, declared all vigilante groups illegal. In fact subsequent events seemed to give the impression that he preferred to work with the Mungiki. For example, just a day prior to the Gathaithi massacre, a matatu had been attacked a few metres from a police road block near Karatina. On the night of the massacre, the nearby police post (now "fully staffed" following Waheshimiwa's visit) was deserted.
All this against a backdrop of continued infighting within the Grand Coalition Government. Reminds me of ex-President Daniel Moi's statement when told that his preferred successor had been handsomely rejected by voters in December 2002. "Wacha wajikaange na mafuta yao wenyewe (let them fry in their own fat)", the dictator is reported to have remarked. And we have truly been doing a good job of that!
PS
Is this for real?

Today, as you enter [Othaya] town, a list of the Ten Commandments greets you, written in a big signboard that also features the national colours of black, red and green. Erected courtesy of [former PC Peter] Raburu, it declares: “Central Province For God". All discos were banned, and there is today no entertainment industry worth writing home about. The action is having a spiral effect on many sectors, including tourism.... even taxi operators must drive out of town by 11pm.

Really great space! This work is Art! congratulations! have a nice week.